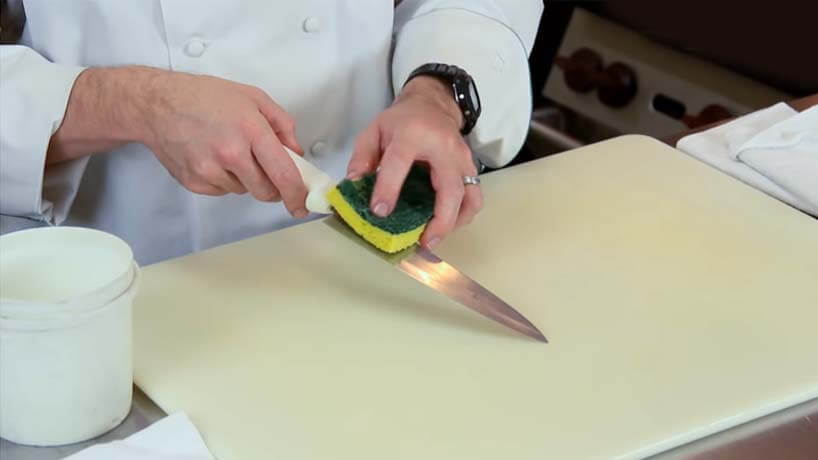 Cleaning a knife blade is such a simple task for most people. Many wouldn’t think twice about what they’re doing when cleaning one. Therein lies the problem. It’s widely unknown to people that you can damage a knife by cleaning it incorrectly.

Most can attest to a time when they’ve used an ugly knife or had to throw away an old one. Yet, it doesn’t occur to anyone that they’re responsible for the knife becoming that way. We’re going to dive into the matter and give you some insights on how to clean a knife blade the right way. Let’s get started. 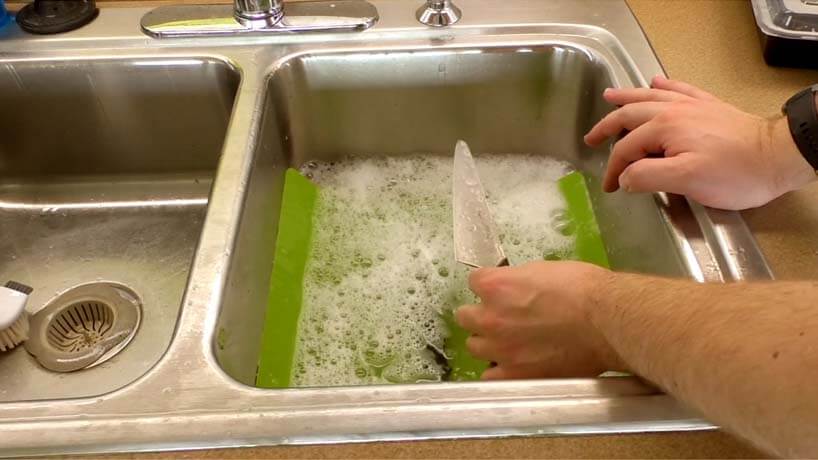 This is the first problem that we’ve found in most household kitchens. Leaving a knife in the sink or on the counter after having used it, is a recipe for disaster. Stop doing this immediately.

After using a knife to cut vegetables or meat, acid and protein residue remains on the blade. These are the primary sources of knife degradation. They will begin to stain the blade and corrode the protective stainless layer.

As soon as you’re done with a knife go over to the sink and rinse it under warm water. Use a soft cloth if you need to remove any bits and pieces that are stuck to the blade. Make sure not to use any steel wool or cloths that can tarnish the blade’s finish.

You’re already a whole step ahead of most people. Even if you were to stop here, you’d considerably reduce the overall damage to the blade over long periods. There’s more to learn though. Our next tips will enhance your knife’s performance and keep your blades in tip-top shape for longer! Let’s take a look.

A common process of washing cutlery is to place a huge bundle into a dishwasher and forget about it until later. For dishes and most cutlery, this is not a problem but for chef’s knives and other more sensitive items, it is. Many folks will open up the dishwasher and let the machine air out before packing their dishes away. This too is a mistake. Why? Rust is the answer.

If left to air dry, the moisture in the air will begin the rusting process. All that’s needed is a little open scratch on the blade where the stainless coating is weak. Don’t leave knives in the dishwasher because the excess moisture will amp up rusting. So don’t get into the habit of doing this.

The way forward is to dry your knife with a soft cloth by hand. After drying, don’t throw it into a knife drawer that’s packed. Rather place it into a wooden knife storage block where it can’t get scratched and otherwise damaged.

How To Clean A Rusty Knife Blade 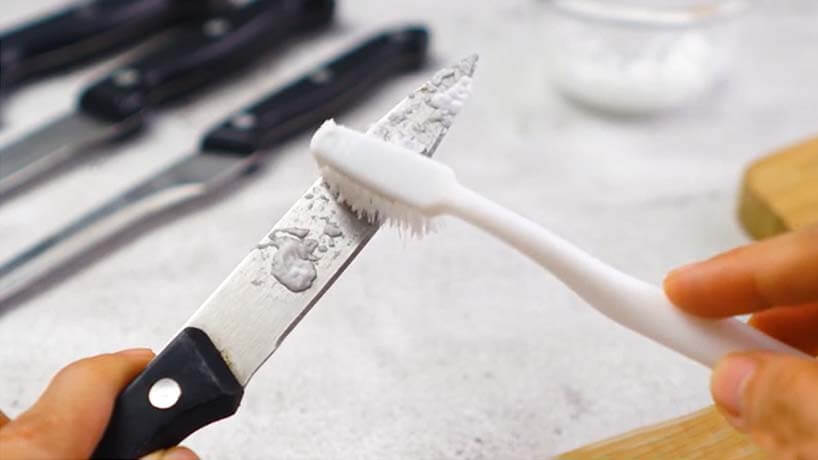 What do you do if it’s already too late? If you haven’t been cleaning your knives properly then you’ll be wondering if there’s still hope. You don’t have to throw them away and buy a whole new set. Unless they’re very bad and dangerous to use.

Rusty blades are a hassle but you can deal with them. You won’t be able to get them like new again but you can make them better. You’re going to use white vinegar and baking powder. Mix a teaspoon of baking powder and a small dose of white vinegar to make a paste. Use this to scrub the blade along with a piece of mutton cloth, sponge, or toothbrush.

Rinse off all the dirt and gunk and then soak the knife blade in vinegar for 15 – 20 minutes. Don’t soak for longer than this because vinegar is corrosive. Then repeat the process.

Do this a couple of times until you can notice a difference. Avoid repeating more than 5 times. After a few times, the method becomes void and no further changes will take place. You’ll only risk damaging the knife blade.

How To Clean A Pocket Knife Blade

Knives with moving joints and different tools are particularly difficult to clean. If you’re only cleaning the blade then you should follow the steps mentioned before. However, if you want to clean the whole knife then you’ll need to do a few more things.

The first step is to take the knife apart. Unscrew the handles or casing and then remove the tools one by one. Make sure you remember how to reassemble it for later.

You’re going to find a load of dirt inside the cavity of the pocket knife. You can only remove it by taking the knife apart. Grab some soap or dishwasher and soak all the pieces in boiling water for ten minutes.

Scrub them down with a toothbrush or cloth. If there are signs of rust then use the vinegar and baking powder method. Don’t let anything air dry. Instead, dry with some tissue paper to soak up all the moisture, and then polish with a soft towel.

Reassemble with a couple of oil drops to aid the easy movement of tools. From here on out you’ll need to be careful how you clean the knife blade. When wiping off dirt, don’t swipe up towards the handle piece. This will push the dirt into all the gaps and open spaces in the cavity of the pocket knife.

These steps are foolproof ways of cleaning but they are not effective if only done once. Without consistency, proper cleaning is a waste of time. So make sure that you get into a habit of doing these things.

It doesn’t take long before you get used to it and it’ll hold your knives in good stead. Knives can be expensive so you might save yourself quite a bit of dough if you take care of them. When you do have to buy a new knife; avoid buying cheap ones made from cheap steel. These are a nightmare, even if you clean them properly.