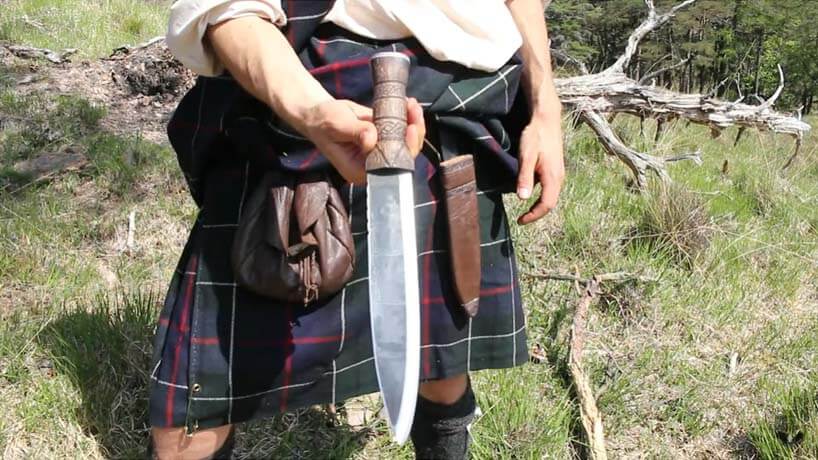 What is a dirk knife? How confidently can you answer this question? Are they the same as daggers? Where do they come from and do people still buy them today? We’re going to take a deeper look at these questions and more. Our goal is to get you informed and confident enough to be able to go out to buy a dirk knife, or at least hold up your end of the conversation with a knife enthusiast (or your Scottish cousin).

You find out where these fascinating and historically rich knives come from and how they are used today. You’ll learn about what makes them unique and what to be on the lookout for if you’re planning to buy one. Let’s get started! 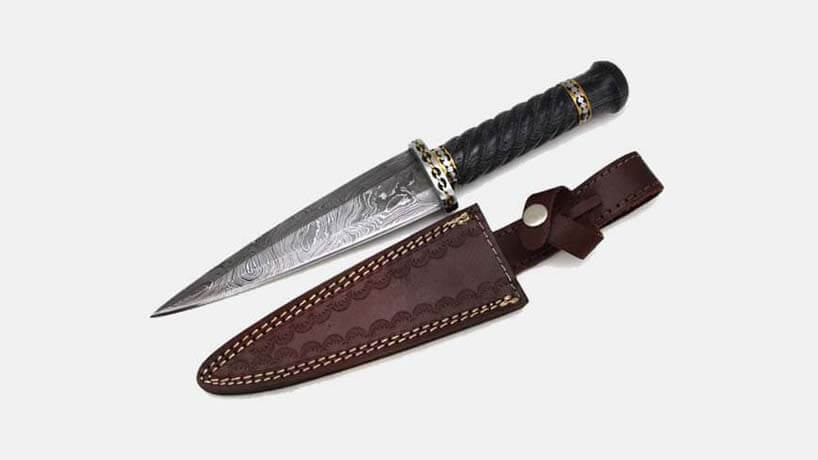 A dirk knife is a mid-sized knife that’s smaller than a sword and larger than a standard hand or pocket knife. Dirk knives were used by Scottish highlanders in the middle ages. Steel was expensive and quite often beyond what they could afford, so the dirk knife’s size offered a great balance between price and functionality.

You’ll find that almost all dirk knives are single-edge (not sharpened on both sides of the knife) and have a thin blade profile and strong, sharp tip. Dirk knives were designed with piercing in mind – hence their thin and slim blades. They aren’t made for aggressive cutting and slicing. While it’s possible to find dirk knives with dual-edges, or exceptionally sharp, they aren’t very common.

The single-sided cutting edge and exceptionally sharp cutting this edge give the dirk knife incredible stabbing ability. They were excellent for getting up close to an enemy and using quick stabbing motions to inflict serious damage. The highlanders also valued mobility and liked to move around a lot on foot. The lighter, slimmer, and shorter frame of the dirk knife gave them fantastic versatility and mobility.

Dirk knives were so versatile that they became part of the soldier’s everyday life. They would use the knife for everything from cutting fruit and preparing meals to shaving bark off trees and to defend themselves. This led to some stunning dirk knives that were adorned with gems in the hilt or handle, along with gorgeous designs and patterns on the steel.

Dirk knives are wielded in one hand, while the other hand is used to grapple the opponent or hold onto whatever was being cut or stabbed. Due to the single cutting edge, dirk knives were often held in a reverse grip. This helped keep the blade close and under control while still being deadly and easy to wield in tight spaces.

One feature worth pointing out is that dirk knives generally don’t have hand-guards. This is one of the ways they’re different from daggers. The lack of a hand-guard is another reason the dirk knife appears so slim and sleek. It also means that there’s a bit of a learning curve when you first use the knife. The balance point and safety concerns are different.

What Is a Dirk Knife Used for?

In the past, the dirk knife was used mostly as a weapon for stabbing and close combat. Outside of battle, it was used rather extensively for basic utility work in camps and work. Over time as the world moved away from swords and knives, dirks weren’t used all that much. You’d often find them used as ceremonial weapons or as part of a military outfit.

They were still used intermittently for utility, but even that was fading as smaller hand and pocket knives were on the rise. They offered the same utility and even more versatility, especially since they weren’t needed for self-defense as much. This meant that workmen and everyday users could spend a lot less, and not have to worry about carrying a large knife every day.

Today, the dirk knife is used mainly as a collector’s item. They don’t have much practical use due to their large size and ineffective utility design. You can get incredible versatility and value for money from knives that are less than half the dirk’s size and weight, along with being far cheaper and more accessible.

While you can still find dirk knives that have been crafted to be practically useful, it’s quite rare. Even when they’ve been made for defensive or utility work, they’re still less effective and more expensive than many other knife options on the market. If you’re a history fan or a knife collector, the dirk knife offers a rich history and cultural inheritance.

You can even learn to buy dirk knives that were owned and used in battle by Scottish warlords and legends – but you have to pay quite a hefty price for them. There are also issues regarding carrying a dirk knife in public, especially when it’s a concealed carry.

You’ll also find many countries/states where carrying a dirk knife is outright illegal. This all means that you’ll very seldom see a dirk knife in public outside of museums and knife collections.

Dirk Knife vs Dagger vs Stiletto: What’s the Difference

Dirk knives are most often confused with daggers and stiletto knives. It is a common mistake but luckily there are a few simple pointers that will show you the difference. The main difference between a dirk knife and a dagger is the single cutting edge. Most daggers are dual-edged and sharpened on both sides, along the whole length of the blade.

Daggers also have broader and thicker blades that are better adapted to cutting and slicing, as well as being proficient at piercing. It’s also important to note that daggers almost always have a hand-guard whereas dirk knives rarely have one. Stiletto knives are known for their extremely sharp point and thin blade profile. They’re designed for piercing – just like the dirk knife.

How to Use a Dirk Knife 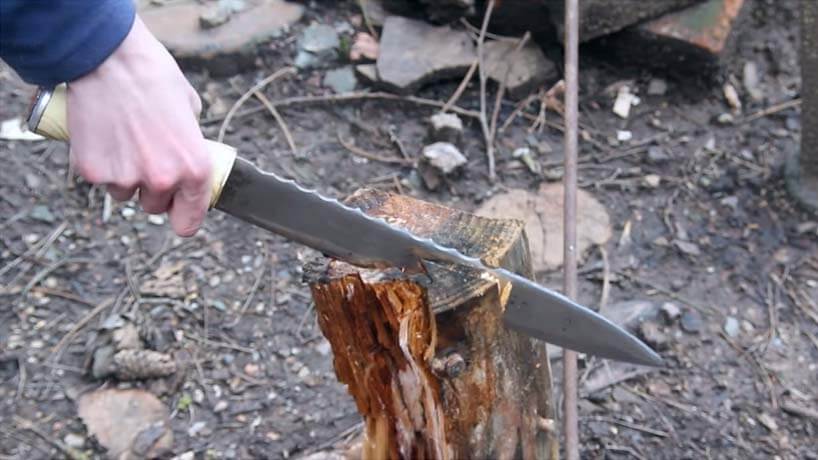 As we hinted at earlier, the dirk knife is designed mainly for combat and self-defense. Today, you can buy knives for self-defense and protection, but they’re often outdone by many other defensive-carry knives. You’ll most likely use a dirk knife with some forms of martial arts training, or in self-defense courses. They’re excellent at teaching you how to deal with a threat that gets too close.

Dirk knives are generally used in the reverse grip. This means that the knife is flipped over in your hands (while you’re still holding the handle) and the blade is below your hand and facing the ground. This grip favors quick stabbing and slicing, so you’ll usually have the sharpened cutting edge pointing at your opponent (as opposed to inwards).

When you’re using the dirk knife for more accurate cutting, you’ll hold the knife in a standard grip. You can also place your thumb on the unsharpened side of the blade while cutting for extra pressure and accuracy. This helps you control the longer length of the blade and make intricate cuts without needing a smaller knife.

What to Look for When Buying a Dirk Knife?

As we’ve already mentioned, dirk knives are used primarily as collector’s items today, so aesthetics and backstory are probably the most important aspects here. If you’re looking for an original dirk knife from Scotland, expect to pay quite a bit extra – especially if it has a history and was used in those times.

These preserved knives come with high price tags and they’re essentially artifacts from a past age. You should look for aesthetic features like gem inlays, handle designs and patterns, and engravings on the steel. Some dirk knives will even have house and family names written on them.

You don’t need to worry about having a functional cutting edge or effective tip as you’re most likely not going to use this knife for anything. If that’s your goal, then you need to find a dirk knife that’s been designed (not preserved) for practical use. Just be warned that many knives perform the same kind of tasks/use far more effectively and with modern steel and technology.

Are Dirk Knives Legal to Carry?

You should feel quite comfortable answering our “What is a dirk knife?” question. You also have the information you need to make a smart purchase and get an awesome collector’s item. Go make sure you know the laws surrounding carrying or buying these knives before you do anything. If you end up owning one of these beauties, enjoy their rich history and unique features! Good luck!