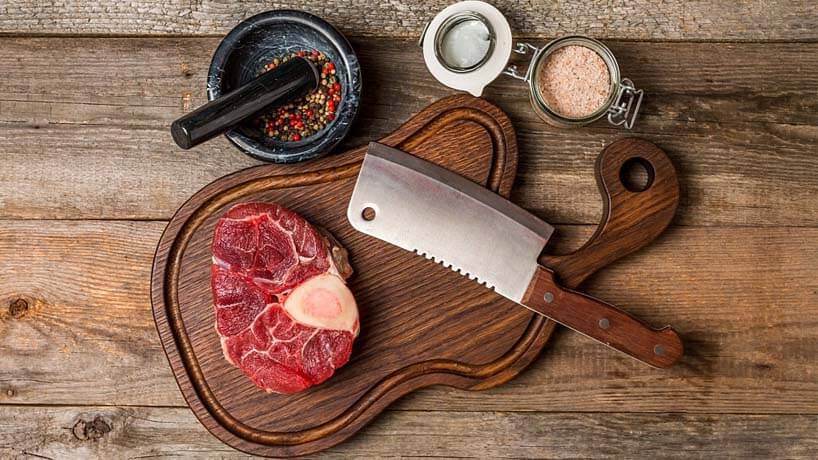 Sometimes known as the gladiators of the knife world, these beasts are brutal at separating entire carcasses in a heartbeat. You don’t need to be big and strong to be a butcher like the movies always suggest but what you need is one of their mean-cutting devices.

Meat cleavers have a minimal range of uses, and once they have destroyed a carcass and are laid to rest, they don’t usually get picked up again for anything else until the next carcass arrives on the countertop. You don’t ever want to mess with a butcher because he’s the one with all the knives and if he has a few of these heavy-duty cleavers, then steer clear for sure.

Meat cleavers are brilliant at what they do, and they can be convenient when bones need to be cut. So it’s pretty obvious what makes these knives to be bone decimators. But one thing that we don’t know is, “Why is there a hole in a meat cleaver?” It doesn’t help with cutting, slicing, or crushing, so why do cleavers have a hole? Let’s find out.

What Is a Meat Cleaver?

Let’s start at the beginning for those that might not know what a meat cleaver is. A meat cleaver is a large knife that has a square or rectangular blade. You may have seen them in movies being thrown across a room at someone’s head. Yup, that’s them. They are not to be confused with vegetable cleavers or chef knives.

These are meat cleavers that have one sole purpose, and that is to obliterate meat and bone. Meat cleavers aren’t subtle in any way; they are huge, heavy, and downright scary. The good thing about a meat cleaver is that you don’t need to be super strong to use them. As long as you can lift it, then you’re good to go.

The natural weight of the blade and the razor-sharp edge will do all the work for you. All you need to take care of is not to cut yourself. Meat cleavers are made from very tough steel that can withstand a great deal of force, and most cleavers are put through a hardening process that gives them extra durability for vital tasks. They are a butcher’s best friends.

Why Is There a Hole in a Meat Cleaver

This may come as a surprise, but it’s very simple. It’s for hanging the blade up. There are other uses that the hole has as secondary benefits. But the hole is designed mainly for the butcher to hang the blade up.

Meat cleavers are just too big; you can’t fit them in draws; place them sweetly into a knife storage block or onto a knife magnet because the thing is so heavy it’ll fall onto the floor and shatter the tiles in your kitchen. So there’s only really one other option: to have a steel hook to hang the knife onto. So manufacturers decided to create a hole in the blade where it’s out of the way and won’t interfere with work.

It’s also quite handy to have a knife hanging up instead of in a drawer because it is out in the open for people to see so that you can instill fear into them to continue the stereotype that butchers are frightening with all their big knives. Another use for the hole in the blade is for a finger grip. Sometimes when cutting through bones or frozen meat, the knife can get stuck, and it’s hard to pull it out.

So what a butcher does is he grabs the blade by putting his finger in the hole and wiggles the knife free with both hands. It is handy and is regularly used to get a cleaver unstuck. If the knife is too hard to get unstuck, you can even put a small metal rod through the hole and get someone else to help you leverage the blade out of the bone or frozen carcass.

How to Use a Meat Cleaver 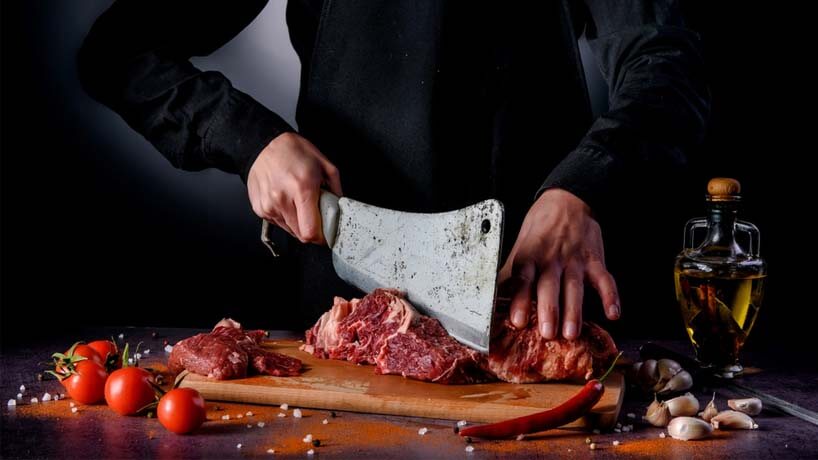 A meat cleaver can be pretty dangerous if you don’t use it properly. The heaviness of the knife means that each time the knife cuts. It has a lot of downforce working on the blade edge, so in the unlikely case that you get your finger caught in the wrong place, that finger might get cut right off.

Cleavers are generally highly sharp and highly functional cutting machines. So it would help if you had the correct technique to avoid accidents and mishaps.

We’ll take a carcass as an example of what you might be cutting. So when cutting a piece of large meat and bone, the correct technique is to lift the cleaver off the surface of the meat or bone until it is roughly 20 to 30 cm up. Then to drop the blade with some force onto the zone that is being cut. This creates two problems; reduced accuracy when cutting and an unsafe environment around the work area.

The other hand that is not holding the cleaver needs to be far out of range of where the knife is striking. The reduction in accuracy means that the knife blade might not go where you intended it to go. So if your fingers are close by, you could accidentally nick or chop them off. So make sure your hand is at least half a meter away.

A huge part of how to use a meat cleaver is the care that you offer it. It’s a heavy tool, and so if you place the knife down on the workbench too hard, you could scratch the steel or damage the workbench. When cleaning the knife, never put it in a dishwasher because it will damage the dishwasher and damage other less sturdy knives.

You always want to hand wash these knives. Afterwards, dry them by hand soon after; if they are left to air dry, they could start to rust after a while. These knives don’t get stored away, so they are constantly exposed to moisture in the air while hanging up, meaning that the likelihood of rust is significantly increased.

When the cleaver starts to show signs that the blade edge is becoming dull. You should sharpen it immediately because you will start compensating by chopping the meat more aggressively, which is unsafe.

Holes in knife blades are pretty standard, and there are several different types of knives with holes in the blade used in other areas, like a santoku knife or boning knife, to name a few. However, the only knife that I know of where the hole is used for hanging it up is the meat cleaver, and in short, that’s the only reason why there is a hole in a meat cleaver.

So remember to be safe when hanging it up because you wouldn’t want a gigantic knife like that to fall on your head. Also, make sure to take care of the blade edge. Use a proper technique, and you should be safe and sound while chopping up meat and bones.