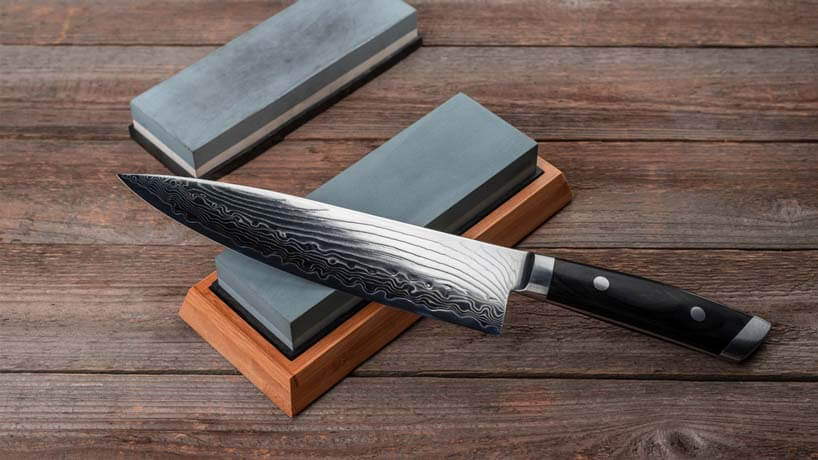 Dull knives are an incredible frustration to many worldwide. Often you buy a knife thinking that it has excellent edge retention and that the blade stays razor-sharp forever. After already paying a nice sum of money to get the knife, you probably don’t want to throw it away. That’s when you might be asking yourself how to put a razor edge on a knife after it has become dull and useless.

A blunt knife is more dangerous than a super sharp one. Simply because when you have to cut something with a blunt knife, you have to use so much more pressure than you would when using a sharp knife. This increases the chances of slipping and slicing one of your fingers or hands.

Not many think like that, and so they continue using the knife when it’s blunt, eventually resulting in an accident and a trip to the hospital. So we’re going to show you how to avoid that problem and get your knives back to efficient functioning, giving your knives that safe feeling again. So let’s dive right in.

What Makes a Knife Dull?

What causes the edge of a knife to become blunt and useless for cutting anything? Is it how you use it or the things you cut with it, or is it just that the knife is poor quality? Most people who spend some time in the kitchen will know that the best way to cut with a knife is to use it on what it’s meant to be used for.

Far too often, we hear complaints from people saying their knife broke or their knife is not sharp anymore and has some minor dents in the blade, and we ask them if they used the knife to cut through hard surfaces like frozen meat and bones, and they soon reply yes of course.

That’s the problem; people generally don’t know which knives are to be used for what. Do you know that you’re not meant to use chef’s knives to cut frozen meat and bones? Or that if you use a sharp knife on a marble cutting board that the knife might break? You also should use vegetable cleavers like Santoku knives for cutting vegetables.

So when we find out that people cut everything with their Santoku knife, it’s not surprising that the knife is dull and unsuitable to be used anymore. A knife needs to be used as specified by the manufacturers. That’s because everything that a knifemaker puts into the knife is optimal for that purpose and nothing else.

It’s like saying to a watchmaker that his watch is weak and good for nothing because it doesn’t give directions to the supermarket. They are two different fields of expertise, so you shouldn’t expect them to do the same thing.

Another big problem that results in dull knives is that people don’t care for their knives. Would you leave your car outside if you knew that it was going to start hailing down golf ball-sized shells of ice? I don’t think so.

You shouldn’t leave your knives to air dry because they might start rusting; instead, you should hand wash them soon after use, not 8 hours later, and then dry them immediately because all the acids in foods will cause the blade to rust after some time. Sadly, when I tell people this, they do it for one week tops and then forget about it.

If you consider all of these aspects and perform them like you would if you owned a Lamborghini, then your knives would last much longer. If they still become blunt soon, you can blame the quality of the knife. Because chances are it’s fake, and the manufacturer used cheap steel in making the blade.

How to Get a Razor Sharp Edge on a Knife 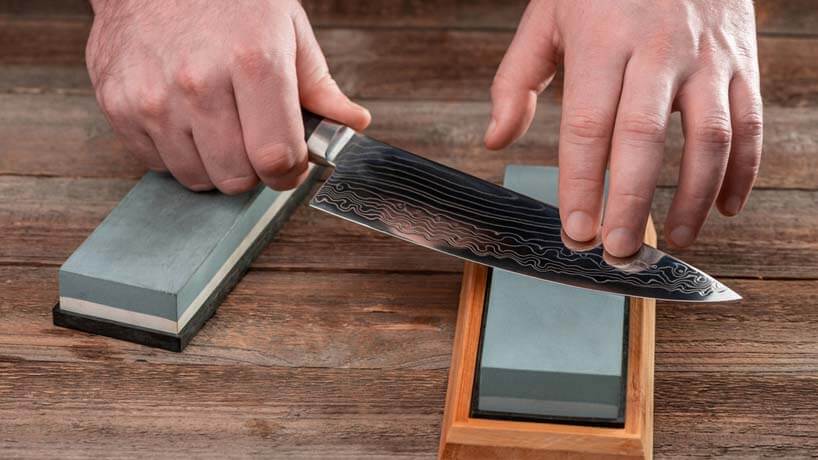 First things first, you need a sharpener or honing device. Without this, your only option is to take the dull blade to a professional knife smith and get him to sharpen it for a price. Otherwise, go online or to your general dealer store and look for a sharpening stone or sharpening rod.

When sharpening a dull blade, you want to make sure that you first find out if the knife is a single bevel or double bevel edge blade. If you don’t know what this is, then you might have to do a bit of research on this beforehand. But in short, it’s where the blades are tapered or sharpened on one side or both sides.

How to Get an Even Bevel on a Knife

After you are sure which type of bevel you have, you can then apply the following principles to get a razor edge on a knife. First, place the sharpening stone on a counter, preferably with a damp cloth underneath it to prevent it from sliding around. Then you want to wipe over the stone with your hand. Do this to remove any residue that could prevent the blade from having even contact with the stone.

Second, you want to point the blade away from you and place the knife on the stone with a shallow angle between the edge and the stone. Think of it like this; you lie the blade flat of the stone so that it’s parallel to the table, then you slowly lift the spine of the knife. Do this while keeping the sharp edge of the knife touching the stone. The more you lift, the deeper the angle, so start shallow and then progress deeper.

That’s how to put a razor edge on a knife. Not just the sharpening but all things mentioned above put together into one extensive process is important. All of that collectively makes your knife razor-sharp and keeps it that way.

If you have a single bevel knife, then sharpening is easier. That’s because you only have to sharpen one side and not worry if the bevels are even. So we hope that you now know how to put a razor edge on a knife. And we also hope you will take care of your knives in the future.