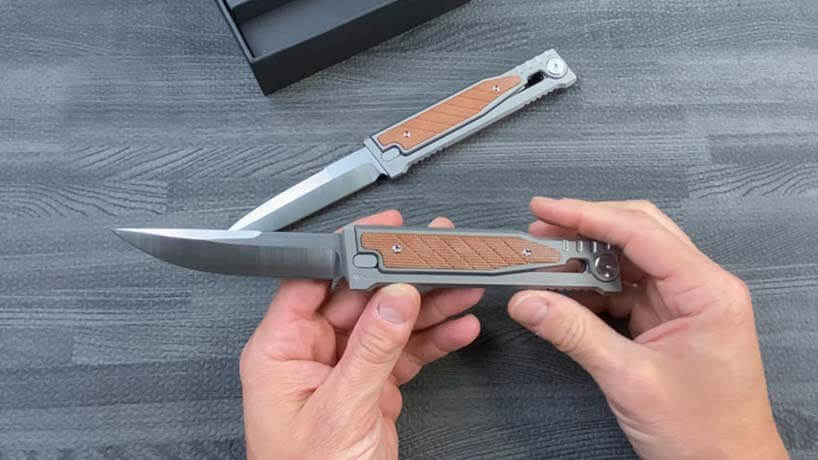 Imagine hurling yourself from a plane in midnight darkness, falling at unimaginable speed through the air, being whipped back by the strong pull of 1940s parachutes, awaiting a swift landing. Instead, you end up dangling in a bushy tree, suspended a couple of meters above the ground. You can hear foreign soldiers closing in – what do you do? This is the situation that led to the development of these handy knives, and the beginning of the answer to “What is a gravity knife?”

Frightening story aside, these knives have had a long history. They’ve also been redesigned and reimagined several times, leading to some of the quickest and simplest one-handed utility knives. Our guide takes a brief look into their history, how they work, how you can best use them, and much more.

A Brief History of Gravity Knives

The introduction gave you a couple of hints as to where these crucial knives sprung up from. German paratroopers in WW2 often found themselves tied up and tangled in countryside trees moments before landing. This left them in a particularly vulnerable spot and often led to them being shot or taken prisoner if they couldn’t cut themselves loose.

The issue was that most knives needed both hands to open and close. Standard knives were often bulky and knocked out of their sheaths in the commotion of slamming into trees instead of open fields. Soldiers needed something compact enough to stick securely in a zipped or clipped pocket that could be quickly opened single-handedly.

Spring knives weren’t incredibly popular before WW2 and switchblades were wildly expensive and hard to get. This led to some pretty intelligent people crafting the first military issued gravity knives. Though captured German soldiers, these gravity knives gradually made their way across Europe and to the American.

The English came up with a couple of reincarnations that were used as secondary combat knives (though they were quite a bit heavier and bulkier). America also had their versions and soon the knife became a global phenomenon. Nowadays these knives are used for utility and among workmen for their demanding jobs.

What Are Gravity Knives?

Now that we know the fascinating history of these intriguing knives, let’s look a little more at their features and what makes them stand out. As the name implies, gravity plays a big role. Gravity knives are larger pocket knives that can be flicked open and closed using only gravity and one-hand.

Soldiers used this to cut themselves free from their parachutes and handle utility work and even self-defense. While these knives were mainly used for utility, they made quite handy and capable combat knives. You can carry these knives in a pocket, on a belt, or in a bag for quick access.

This is where many other combat knives of the time failed. They were too big and bulky, often being knocked out of their sheaths. These gravity knives don’t have any kind of spring system or assisted opening, and operate in a similar way to many butterfly knives.

Gravity knives come in quite a few different shapes, sizes, and designs, but we’ll touch more on that later. For now, let’s take a deeper look into the purpose behind these marvelous tools.

What Is the Purpose of a Gravity Knife?

The way gravity knives are used has changed just as much like the way people dress. They started as a soldier’s utility and quick access knife, most famously for getting themselves out of tangled parachutes. You could quite capably use these knives for combat (as the English later adapted them for). Combat gravity knives come in a heavier frame and pack a heftier and larger blade.

As time has marched on, these knives quickly became everyday carry (EDC) knives for everybody from businessmen to young gang members. On a side note, this led to these knives becoming pretty popular for young gang members and eventually led to it being made illegal to carry in places such a New York in the late 1900s.

These days, where gravity knives are still legal to carry, they’re used extensively for utility and protective needs. They excel for – and are hugely popular with – tradesmen and workmen. They’re super-quick to deploy and are reliable without too many moving parts and springs.

How Does a Gravity Knife Work? 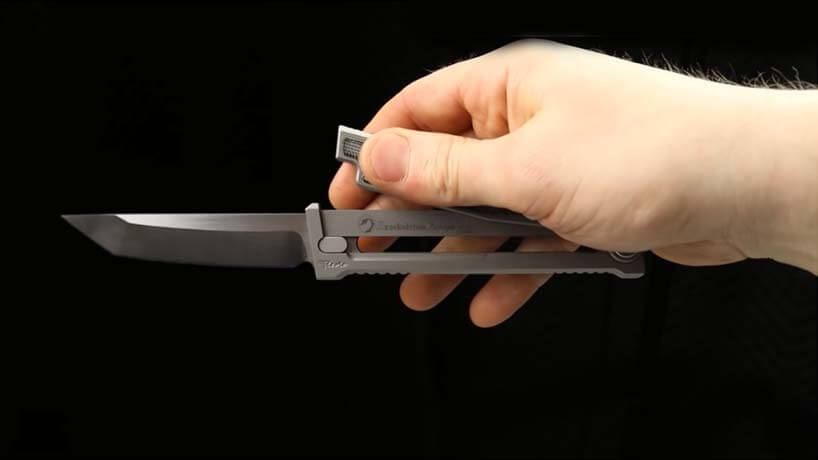 “What is a gravity type knife?” you ask. Despite sounding like a weapon you’d fight Thanos with, these knives are incredibly simple and easy to use. Most standard gravity knives work by releasing a clip or holder to allow the blade to freely slide out into its open position.

This release is powered by gravity or a little flick of the wrist. Once the blade is in its open position, the holding clip slips back into place to stop the blade from accidentally closing again. This process is generally the same for the different types and styles of gravity knives.

We’re going to look at the different types in a moment, so stay with us. Since gravity knives have been designed to work one-handed, the locking clip or button is often found near the front of the handle (next to the bolster) where it’s easy to reach with your fingers.

You unlock the holding clip with your finger and point the knife towards the ground. It’ll simply slide out and click into place. Alternatively – if you want to look like a ninja – a snappy flick of the wrist will jettison the blade into action.

How to Use a Gravity Knife

This is where you’ll need to pay careful attention to your particular knife. Nowadays, with so many variations and interpretations of gravity knives available, it’s easy to find a one-size-fits-all user guide. Use this section in combination with the following section to find what works best for you. The first thing to do is to unlock the clip.

Some gravity knives have a physical switch that needs to be lifted or opened. It’s usually on the side of the handle and closer to the knife’s neck. Other knives have a button or clip that has to be pressed. Some even have two-buttons (such as the Paragon Warlock) that are on opposite sides of the knife and need to be pressed at the same time.

You’ll almost always use your thumb and/or pointer finger to release the blade. You don’t usually need to clip the locks into place, it happens automatically when the blade is in place. When you’re closing the blade, press the buttons or open the switch. Face the knives upward so that the blade retracts or folds back into place (where it’s locked into again).

While there are a lot of commonalities between the different types of gravity knives, there are also some stark differences. The first, and probably most obvious is the way the blade is housed. There are two main types here: blades that fold into the handle via a pivot; and blades that retract into the handle.

Both of these builds are locked up tight by click-in switches and locks that stop the blade from slipping. They’re exceptionally safe and can both be easily operated single-handedly. There are some differences when it comes to the opening mechanism. Many premium gravity knives use buttons that have to be simultaneously pressed to release the blade.

Another common unlocking mechanism is the flipper style switch found near the neck of the knife. You simply need to lift the flipper from its flush position and push it forward to release the blade. Aside from these major differences, you’ll find brand-dependent variation in the look and feel of the knife.

Handle and steel quality will vary quite a bit across different price points. Many modern gravity knives include accessories like awls and marlin spikes. You’ll get a little more functionality while still getting the age-old utility and performance that gravity knives are known for.

We touched on this a little earlier and it’s one of the more important points you’ll need to think about. We’ve mentioned that these knives were made illegal to carry in New York (and many other states) in the late 1900s. Unfortunately, this has carried through to current times and many states won’t let you carry a gravity knife.

They became widely used by youth gangs and led to some ugly violence, so it’s fair that a firm stance needed to be taken. The unfair part was all the arrests of innocent civilians that were caught off-guard carrying gravity knives for general utility at their jobs. There is a silver lining though.

Recently, steps have been taken to legalize these knives as EDC options in New York. It’s a step in the right direction if you’re that way inclined. Our advice to you is to make sure that your state allows you to carry gravity knives (or have them at all). If you don’t live in the US, you should do a quick checkup of your local laws.

What to Look for in a Gravity Knife?

We’ve left this section until last because it’s very subjective. The knife that makes your eyes water in anticipation, might repel another in disdain. The best thing you can do is to write down your needs and non-negotiable features. Search for a knife that meets them and gives you what you’re looking for.

If you don’t know where to start, take a trip down to a local knife store and get your hands on some knives. Don’t buy anything yet. Take a little time to get a feel for the size, weight, and ergonomics of the different gravity knives. Pay attention to their balance and how easy it is to deploy the blade.

You can also mess around with other knives and build a baseline for what you’re after. Speak to some enthusiast friends and ask them what they like in a gravity knife. Experience is an excellent teacher and knife enthusiasts love sharing their knowledge. With a little patience and attention to detail, you’ll find the perfect gravity knife for you.

Well done for taking the time to get informed. Choosing a knife can be quite overwhelming, especially when you’re bombarded with hundreds of choices. It can be tough to choose a right knife when there are so many alternatives – but you’re on the right track.

Remember to write down your needs and use that as your baseline. You can’t go wrong. Hopefully, you’ve gained some valuable bits and filled in any blank spaces you had. Next time you’re asked “What is a gravity knife?” you can fire away – and maybe even show off your new knife! Good luck!

P.S. Don’t forget to lure them in with the story of the soldier tangled in the trees!