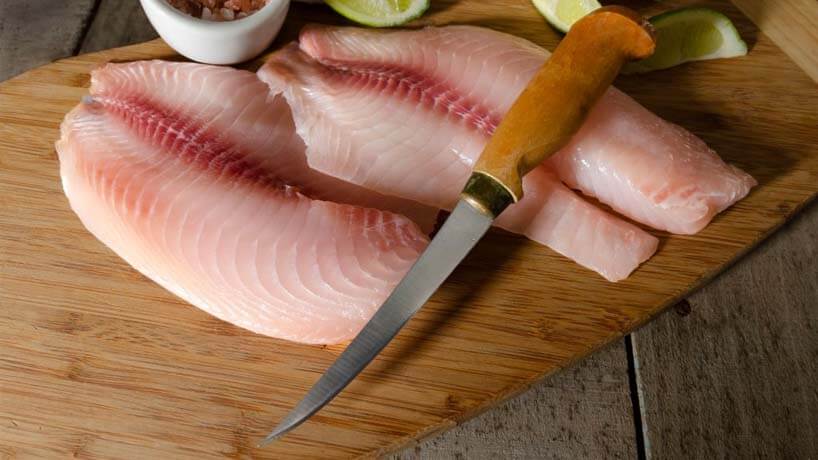 Filleting fish can be a gruesome task, and without the proper tools, it can become impossible. The secret to fillet knives is their intricate design and slender structure. You’ll only know the true power of a good fillet knife when you’ve used a bad one and know the pain of it. So, what does a fish fillet knife look like?

There are tons of fake fillet knives, especially in coastal areas, because that’s where most of the market is. How do you differentiate between a genuine fillet knife and a rip-off? We’re going to give you some tips and pointers to ensure that you get the right thing and know what to look out for. Let’s get started!

This is the main point of contention between genuine knives and fake ones. The blades may look similar, but they don’t work the same. A good fish fillet knife has a curved blade that tends upward and gradually comes to a very sharp point.

The blade is quite long and has a very distinctive shape that resembles a clipped toenail or crescent moon shape. If the blade is excessively long, then it’s probably not genuine. The same goes if the blade isn’t curved. Some blades come with a hook on the back of the blade, and some have a serrated spine. All the same, these variations seldom stray away from the curved design.

The blade is tapered very low towards the edge, and this is to aid with separating the fillet from the carcass. If the taper is too prominent, then the slicing will be too smooth and won’t split apart from the carcass, making the workflow very unsteady and frustrating. The fillet should slide right off the bones without any extra effort.

It can be hard to tell if a fish filleting knife is a full tang or partial tang because the handle material covers it entirely. A tang refers to how much the blade extends into the handle of the knife. It doesn’t really matter which one you have, but you’ll probably find that genuine fish knives have a full tang to aid with overall balance.

The vital thing to note is the shape of the handle and not necessarily the material used. That’s because there’s a diverse range when it comes to the material used in fish filleting knife handles, from wood to nylon and rubber grips.

The handle will almost always have a bump at the top of the handle, allowing the knife to be held in several different ways while filleting. The underside of the handle differs from knife to knife; some have finger grooves while others have smooth curves.

Some knives have a bolster that protects the fingers and knuckles from the fish in case of sharp fins that could poke or cut you. Good fillet knives have an end cap of some sort, either in the way of a steel end cap on wooden handles or in the form of a hook-shaped plastic finish that offers additional grip to the person filleting.

How to Use a Fish Fillet Knife 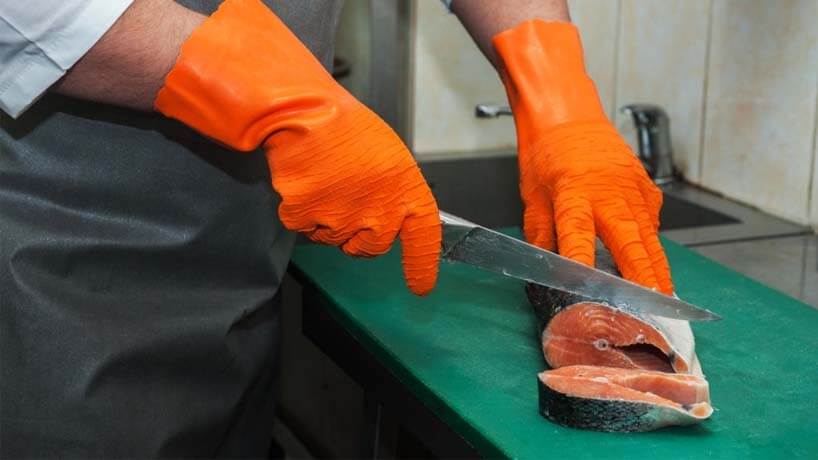 We’ve looked at what a fillet knife looks like, and so now we’re going to talk about the best way to use it. After a juicy catch out at sea, it’s a mouth-watering wait to have some tasty fish in your belly. So we’ll show you how to do it yourself to save time and hunger tolerance.

First up, you’re going to slam the fish on the countertop. You don’t have to slam it; you can place it nicely. Make sure the surface is clean and clear of scales and bones before starting. You can use a grip cloth or put a traction mat underneath the fish if you’re struggling to get a good grip.

Next, you’re going to take your knife and place it at the tail of the fish with the blade pointing away from your body. Begin cutting slowly with even strokes across the length of the fish toward the head. The fish’s backbone can be used as a reference or guide to show you where to cut. In the beginning, it can be pretty frustrating, but with a bit of practice, you’ll get there.

After that, you’re going to want to take off the fish’ skin. Grab the fish by the tail, place the fish skin down, then insert the knife crosswise between the skin and the meat. Run the knife down toward the head once again until the skin comes off with no flesh attached.

If the fish is quite large, then you can open the fish up first by cutting both the top and bottom of the fish from halfway down, starting from the dorsal fin. This will allow you to slice from the backbone and get the fillet off in one piece without making a huge mess.

Q: What Is a Good Fillet Knife for Fish?

A: One of the best brands that we’ve come across is the Dalstrong fillet knife. It has incredible sharpness and has terrific edge retention. It is made from high carbon German steel with a hardness rating of 56+, which falls in the optimum range for fillet knives. Also, it comes with a beautiful leather sheath for safe storage and protection.

Q: What Is a Fish Fillet?

A: A fillet refers to the meat that you get from a fish. The parts that you eat are from fillets. The sides of the fish contain the bulk of the edible flesh, and so when a chef “fillets” a fish, he is removing the large portion of meat from the side of the fish. Some fillets come with the skin attached, and others come with the skin removed. Either way, it is still referred to as a fillet.

The world of ocean food is a vast market space and has been flooded with different fish and exotic seafood. Sushi chefs or filleters are very common in coastal regions. If you’re one of them or want to become one, you’ll know the importance of having yourself an excellent filleting knife.

When you’re under tremendous pressure to get the fish filleted, there’s nothing worse than being held up by inadequate tools. The higher-end fillet knives are pretty pricey, like the Dalstrong or Mercer fillet knives. But they will serve you superbly and will last for ages if you treat them right.

There are loads of great fillet knives that are not as expensive, but be careful to check whether they are genuine. Many factories use scrap steel to make knives and then sell them undercover as if they are high-end brands, so ask yourself, “what does a fish fillet knife look like?” You know now what to look for, so you won’t fall for it, hopefully.

Filleting fish quickly and effectively takes quite a lot of practice, and at first, it might seem like it’s impossible. But if you stick with it and use the correct techniques, you’ll soon become a master filleter.