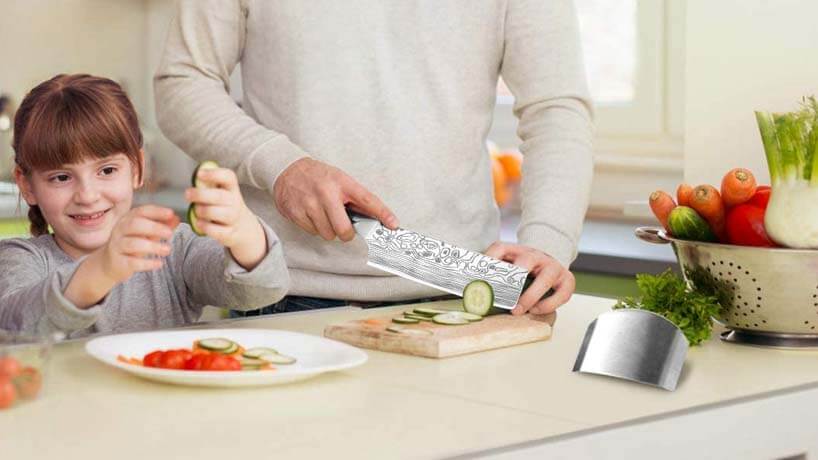 Japanese knife ware is among the best, if not the top-tier knives in the world. Their ultra-high-quality steel allows the ultimate cutting tools to be forged, and Japanese tradition holds each of their esteemed designs in high regard, like the Nakiri knife. This age-old traditional knife has been around for a very long time and continues to live on in kitchens worldwide.

Nakiri knives might not be known well by name, but they are easily recognizable by their shape and appearance. There is a problem, though; most people have no idea of the tradition behind Nakiri and the knife’s purpose. It gets used for the wrong thing far too often, and because people are unaware, especially in the west, the knife’s name gets slowly tarnished.

People buy Nakiri knives to understand that somehow it’s the same as a butcher cleaver, destroying whole carcasses. Yes, it may look similar to a meat cleaver, but it in no way is described as such, meaning that for people to confuse them is a lack of effort to research the knife. So, we’re going to try to iron out some of the misconceptions surrounding the question, “how do you use Nakiri knives?”

What Is a Nakiri Knife?

A Nakiri knife is a Japanese knife that originated in the seventeenth century and came from the Japanese words “Nakiri bocho,” which translates to “knife for cutting greens.” The tradition in Japan at the time was to use one knife for greens and one knife for meat and fish; you weren’t supposed to use them for anything else.

The Nakiri knife is the birthplace of the design for meat cleavers and is the main point of confusion. The meat cleaver design came from Nakiri, and that’s why it has the famous rectangle shape with a flat blade. Nakiri knives have a flat blade instead of a curved blade like the one you would find on a chef’s knife.

Chef’s knives are usually made from German high carbon steel, whereas Nakiri knives are made from Japanese steel, which is much harder. The harder steel gives room to sharpen the blade to a much finer degree making the Japanese blades unrivaled in terms of sharpness and edge retention. The only problem is that Nakiri knives are not as durable as chefs’ knives or other Western kitchen knives.

This predicament is caused simply because of the hardness of the steel. When the steel gets harder, the durability decreases, and the blade is more prone to damage like chipping or denting. So chef’s knives are made with softer steel to make them less brittle, but as a result, they suffer a reduction in sharpness and edge retention, meaning that the blades don’t stay sharp for as long.

What Is a Nakiri Knife Used for? 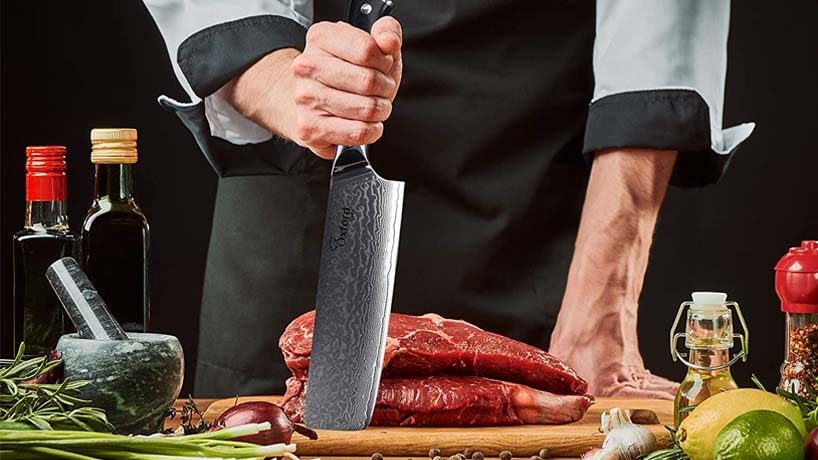 As the Japanese translation says, Nakiri knives are only meant for greens – vegetables. Nakiri knife uses are limited, and it’s supposed to be that way; the makers haven’t made a mistake with this. The knives are designed to have immense sharpness and lifespan, provided that they’re treated with care and maintained very well.

It means that you better not leave the knife in a sink without being cleaned for hours. It also means that they don’t get put into a dishwasher to get bumped around with other cutlery. They need to be cleaned soon after use and then hand dried and stored in a safe place like a knife block or sheath, not in a drawer full of other knives.

The flat blade is the perfect vegetable cutting machine, and it is perfect for slicing and chopping vegetables. You can perform specialty cuts like julienne slicing or precision detail work because the sharpness of the knife makes it all too easy.

Many sushi chefs also use Nakiri knives to slice the softer types of sushi because they’re the blades that can accurately cut them. They can be used on soft fish with no bones but should be used with care to avoid damaging the blade.

How to Use a Nakiri Knife

It’s one thing knowing what the knife is supposed to be used for, but how to use a Nakiri? How do you use Nakiri knives? The answer lies in the style of the blade, which is flat rather than curved. Chef’s knives are generally used with a rocking motion to utilize the full curvature of the blade, but in the Nakiri flat blade style, that’s not the correct technique.

The hand positioning will also play a role and help you cut more precisely if you get it down. The Nakiri knife is best used with an up-down technique compared to a rocking motion technique. The knife is heavy and incredibly sharp, so there is less need to apply more effort and energy.

Let the blade do the work and relax your hand by placing your palm on the butt of the handle and wrapping all your fingers around. The tip of the blade is typically rounded, which will maintain contact with the board; then, with the rest of the knife, simply move it up and down to chop the vegetables. There is no need to slam the blade to cut food items because the knife should have adequate sharpness.

Difference Between Nakiri and Santoku Knives

You may have heard of another knife called a Santoku knife with a very similar set of functions as a Nakiri and has even been said to be superior. Well, in all honesty, it isn’t true. It’s a similar Japanese knife made with the same type of steel used only for vegetables.

The Santoku knife is quite different because it has a curved blade and forms into a sharp point, kind of like a chef’s knife, and has mixed a western knife style with a traditional Nakiri blade to form the Santoku. The Santoku is a formidable vegetable cleaver and is not much different from a Nakiri blade in terms of performance.

Still, the flat blade of the Nakiri is hard to match for effective vegetable cutting. Santoku blades often have dimples on the blade known as a Granton edge which stops the vegetable slicing from sticking to the side of the blade, whereas Nakiri blades aren’t often found with this design feature.

After all of the studies that we’ve compiled on all different types of knives. It’s safe to say that most Japanese knives are at the top of the chain and especially on the vegetable cleaver’s side of things. Their unbeatable sharpness and edge retention deliver supreme precision and effortless cutting.

The necessary energy to use a Nakiri blade is far less than any other chef’s knife on the market. So if you’re looking for a knife that can put your wrists and shoulders to rest when you’re stuck in the kitchen, then this is it. We hope that people will start to use Nakiri knives properly. If you ever get asked, “how do you use Nakiri knives?” don’t forget to answer correctly.