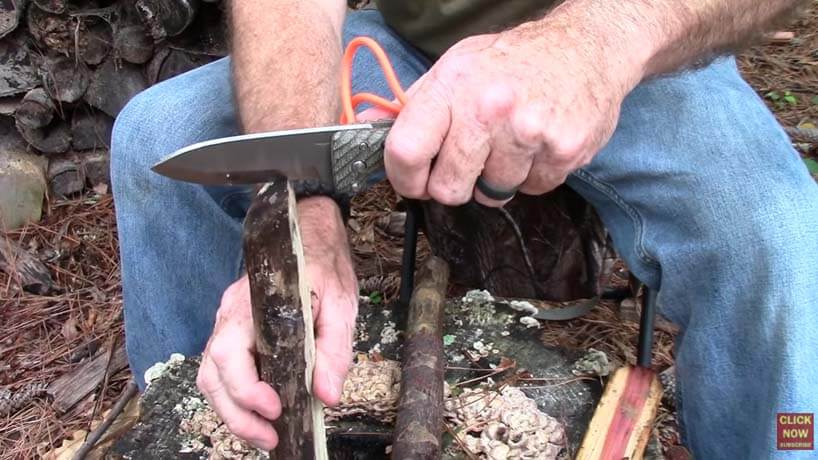 Bushcraft knives are very particular knives designed primarily to survive out in the wild or out in the bush. Bushcraft is the art of understanding the wilderness and all the factors that could affect you in the wild. A bushcraft knife is designed with all these things in mind and tends to focus on survival aspects like finding water that’s stuck inside a tree trunk.

Bushcraft is sometimes also viewed in the light of whittling or carving, whereby someone can carve a shape out of a bigger piece of wood. We’ll highlight key points for both. Many people find that when they go camping or exploring outdoors, they don’t have a suitable knife to help them if they get into a sticky situation.

A small swiss army knife Bushcrafter just doesn’t quite cut it when you need to build a shelter or find water. A small knife might be great for something like carving or whittling, but not for bushcraft in the traditional sense of the word. So we’re going to dive into a couple of issues surrounding bushcraft and hopefully answer the question, “can I use a lock knife for bushcraft?” Let’s get started.

Can You Really Do Much With a Small Lock-Knife?

Loads of people all over the world have a lock knife or know about lock knives. They are common and easy to find, with a fair price attached to most brands.

Sometimes it isn’t easy to know what a knife is supposed to be used for because there’s not always a description that tells you how and how not to use the knife. Manufacturers secretly do this on purpose, hoping to use the knife in the wrong way and break it, which means that you’ll have to buy another one.

So What Is a Lock Knife?

“Lock knife” is just another way of saying “folding knife.” They are the same thing, and there’s no difference. All lock knives have folding blades, and all folding knives have a locking mechanism that holds the blade in place when it’s opened up. The locking mechanisms range from frame locks to mid-locks, which all vary in character.

The strength of a folding knife comes from the locking mechanism because all the force that is applied to the blade is channeled into the locking support. It’s not like a fixed blade that has a blade that runs all the way into the handle with no joints. They offer much greater support and strength as opposed to the weaker lock knife or folding knife.

So what’s the deal with a lock knife as a folding bushcraft knife? Does it work? The answer is yes and no because there are some areas where the lock knife is helpful out in the wild, but in principle, their effectiveness is hugely reduced compared to a full-on survival knife with a fixed blade.

Bushcraft knives are particular to their environment, and this makes them formidable tools outdoors. You can use these knives for menial tasks like when on a camping or hunting trip, whereas a lock knife can’t upgrade to the level of a bushcraft fixed blade survival knife.

A lock knife has limited capabilities but still has many valuable qualities that often come in handy. Lock knives are small and compact, so they can be attached to your belt or even put inside your pocket without causing discomfort. These knives are light and easy to carry around all day.

It’s always nice to have a blade handy if you’re out and about all day because the chances are that you’ll need it for something at some point. A lock knife may not be a folding survival knife with a firestarter, but it sure is helpful for smaller tasks. You can also use a lock knife for more traditional bushcraft, and the compact nature of the knife allows for maximum control when shaping wood.

A bushcrafting knife would differ from a bushcraft knife; note the difference in the words because a bushcraft knife is more like a survival knife, whereas the other is a knife used for bushcrafting. The small, sharp blade is perfect for carving, and it makes for a tight grip when crafting.

The only problem with a lock knife when bushcrafting is that sometimes the locking mechanism can grate against the inside of your hand. For example, a liner lock knife would be terrible with this because the lock slider gets in the way when moving the knife to cut.

This is not because of a poorly designed knife; it’s simply because lock knives weren’t necessarily intended to be used for bushcraft. However, they can still be used no problem if you wear a glove or cover the lock with tape.

Can I Use a Lock Knife for Bushcraft? 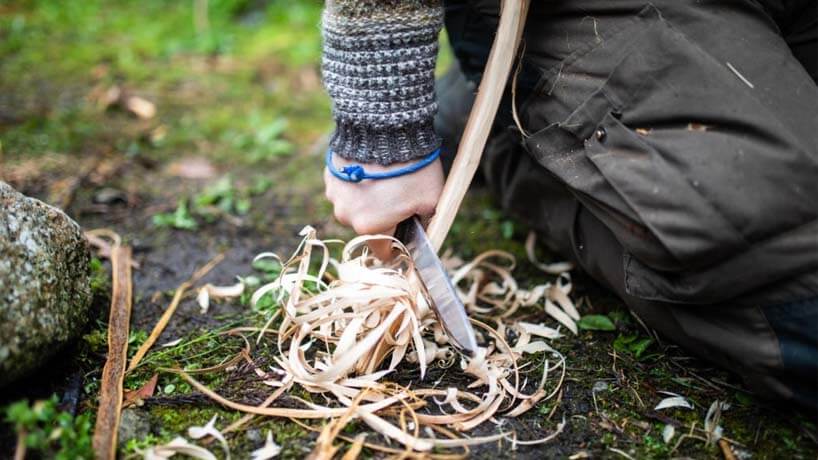 What’s the verdict? There’s still a lot of research on whether or not it is wise to practice such a thing. Still, as time goes on, we’re starting to realize that instead of telling people to avoid using knives in the wrong areas of expertise, that it’s always better to have a knife of some sort instead of nothing at all.

It has become more apparent that if you are outdoors, you need to have something with you. This has caught many people off guard in the past where they had a lock knife or a small pocket knife but had read somewhere that it’s a bad idea to take a tiny little knife into the wilderness, so instead, they took nothing.

What was the result? They found themselves in a sticky situation and wished that they had bought the tiny knife. Even if you don’t have a survival knife or proper bushcraft knife, you should still take something pointy, either for self-defense or for a chance to perform survival tactics.

A knife from your kitchen can do the trick. Heck, even a butter knife is better than having nothing. You’d probably find that taking a big chef’s knife would prove to be a better fit for the wild than a silly bushcraft folding knife or something to that effect. So, be proactive and think outside the box because it may hold you in good stead when you need it the most.

The answer, in short, is yes. “Can I use a lock knife for bushcraft?” – Yes. We won’t tell you no, but we will say that it won’t be the best-suited thing out there. Once again, it’s better than nothing, but if you had a choice, then you’d want to stick to the survival knife for sure.

A lock knife is just not strong enough, so try to think of getting a survival knife for bushcraft purposes as an investment because if you’re the outdoorsy type, then it will be of great benefit. In the more traditional sense, sure – use whatever you like. Bushcraft can be achieved with anything sharp. Just be careful of the pieces that stick out or get in the way because it could cause some pain after a while.