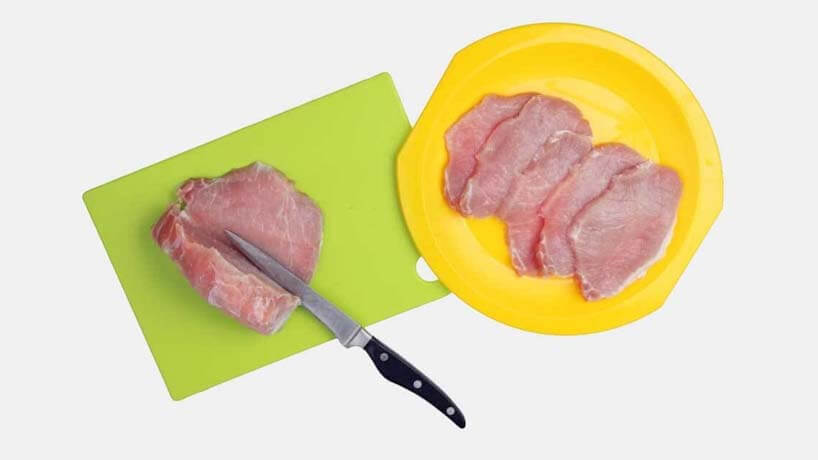 If you’ve ever carved up and served meat before then you know the tastiest bits are near the bone. It has a better flavor and can add a whole new taste to your dishes. I’ve ruined quite a few knives over the years by working too close to the bones – especially my utility knives.

They don’t have the flexibility to work around the bone and get the best part of the meat off cleanly and safely. This means that the cutting edge is taking all the force and can’t move with the flow and direction of the bone. Chef knives are often too thick and bulky to reliably strip the meat away from the bone or peel away the skin.

Their blades are too tall and the knife doesn’t have the dexterity to do a high-quality job. This is where the boning knife comes in. We’re going to learn how their unique design and build make it one of the best knives available for deboning and getting the best possible cuts of meat.

By the end of this guide, you’ll be able to tell the difference between a boning knife and other similar options – as well as know exactly how and when to use it! You’ll be ready to decide if it’s worth the money and whether a great boning knife will make you a better chef. Let’s dive in!

What Is a Boning Knife Used for? 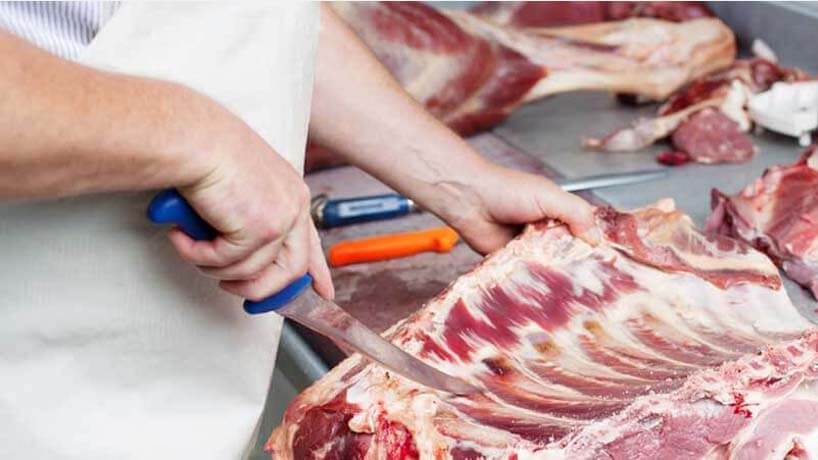 Boning knives are incredibly useful knives for the professional kitchen, restaurant, and even home kitchen. They’re capable of stripping that luscious and flavorful meat off the bone – saving you loads of money, and improving the overall taste of your meals. The issue is that boning knives are often used in the wrong way or not at all.

Even if you have a small kitchen at home, boning knives offer you a unique and efficient way to work on your meat as quickly and effortlessly as possible. To put it basically, a boning knife is used in two main ways. The first is after the carving knife. You’ll use the carving knife to carve away most of the meat from the carcass or slab.

Since you don’t want your carving knife to get to close the bone and potentially ruin its edge, we use a boning knife instead. Its flexible and thin blade glides effortlessly through the meat, right next to the bone, getting as much meat as possible off the carcass.

The second most common way boning knives are used is for deboning large shoulders of meat, ribs, and even full carcasses. This is especially true for butchers or kitchens preparing their steak cuts. You’ll use the boning knife to outline the bone’s shape and get as much meat off the carcass as possible.

Some other uses of boning knives are to remove the skins of fish and poultry, as well as trimming excess fat off of carved and deboned meats. They’ll also often be used for removing the seeds, pips, and cores from various fruits and vegetables.

Today, you can find boning knives in different shapes and sizes, in professional and home kitchens, and even in the hands of experienced butchers. Now that you know the general purpose of boning knives, and where they fit into the kitchen, let’s take a look at the common features found on most boning knives.

What Are the Features of a Boning Knife?

They generally use soft steel that’s easy to touch up or sharpen. Boning knives have a long, thin, and straight blade. The handle is often taller than the blade and quite a bit heavier. Which helps give the knife a rear-heavy balance point. This makes it easy to hold the knife in a reverse edge-in grip for outlining and cutting around bones.

Boning knives get slimmer as you move from the handle towards the tip. This helps to keep the blade non-intrusive and drag-free while cutting and slicing. The handles are usually relatively wide compared to the size of the blade, and easy to hold in standard and reverse grips.

There’s a prominent finger guard that sticks out quite a bit to stop your hand from slipping onto the blade. It also helps you get a secure and comfortable pinch grip for accurate slicing, trimming, and detailing. All these features come in a lightweight yet durable construction that’s easy to maintain and use for heavier meat cutting.

Is a Boning Knife Necessary in a Home Kitchen?

The answer to this question will vary a lot depending on the type of cooking and your level of devotion to becoming a better chef. If you’re just a casual weekend cook that doesn’t take it too seriously, or you’re not looking to up your kitchen game. Then a boning knife isn’t the most essential upgrade to your kitchen.

The truth is that when it comes to boning knives, you get what you pay for. While it’s rewarding in the short-term to get an impressive deal on a budget boning knife, it’s not going to turn out well in the long run. You’ll end up spending more in the long run on replacements and repair costs.

That’s why we usually advise you to save up a little longer and get a more premium knife. If you’re keen to get higher-quality cuts of meat (closer to the bone so they taste better). Then a boning knife will do wonders for your kitchen. It’s worth mentioning that you should only get a boning knife in your kitchen if you already have a chef knife and a utility/paring knife.

Boning knives don’t get used nearly as often as these other workhorse knives do – so your money would be better spent there. If you already have these knives in your kitchen, then YES! Once you’ve used a high-quality boning knife. It’s tough to imagine carving up a roast or deboning a shoulder of pork without one.

Almost every professional or serious enthusiast’s kitchen will have a boning knife (if they don’t, they’ll most likely have a fillet knife – if the restaurant focuses more on fish). These knives are specialized and exceptionally good at what they do. You’d most likely damage your carving or chef knife trying to do what the boning knife should.

How to Use a Boning Knife 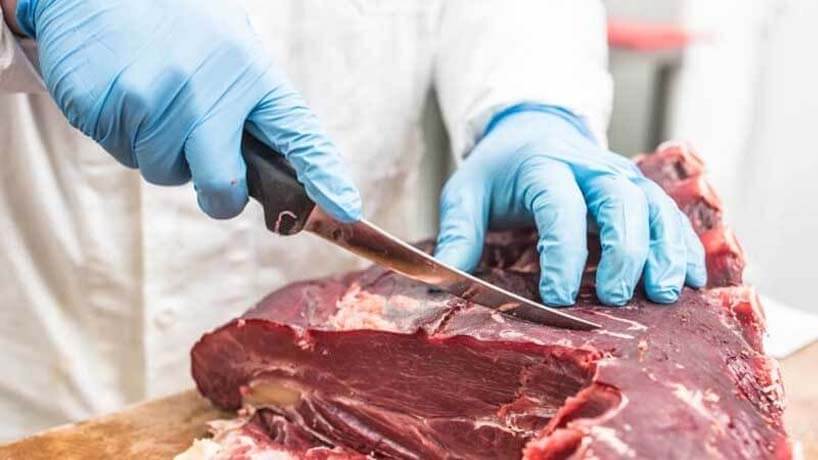 There are two main grip styles when using the boning knife. The first is the standard and well-known pinch grip – but with a twist. You hold the knife secure with your thumb, middle, ring, and pinky fingers. Place your index finger on the spine of the blade and get the rest of your hand comfortably around the handle.

The boning knife should be held firmly, but not in a death-grip. The index finger helps to keep the blade steady and keep the tip under control. This is especially important for boning knives due to their flexible blades and thin upper half. The second grip is the reverse edge-in grip. Point the tip of the boning to the ground and wrap your hand around the handle.

You can place your thumb upon the butt of the handle. But I prefer to keep it wrapped around the handle. You’ll use this grip for outlining and cutting around bones and cutting through larger pieces of meat. You can get quite a bit of additional power with this grip style. The pinch grip is better for separating skin and trimming fat off of already carved pieces of meat.

P.S. When you’re slicing meat off the bones, try to keep the knife as close to vertical as possible. Use the sharp and thin profile of the tip to help do the work for you.

These knives work hand in hand. They’re designed to complement each other. You generally use the carving knife to take off the bulk of the meat. And then the boning knife to remove the meat as close to the bone as possible.

Boning knives are far thinner, lighter, and slimmer than carving knives. Carving knives focus on having a long and consistent cutting edge, whereas boning knives use the tip a lot more.

While they look quite similar, the fillet knife is lighter and more flexible than the boning knife. If it’s sharpened enough, the boning knife can work on fish without ruining it. But it takes quite a bit of skill. The light frame and less-intrusive blade of the fish fillet knife help it to work easily around delicate fish bones and descale/fillet them effortlessly.

Well done for taking the time to get informed! Now that you can answer our “What is a boning knife?” question with confidence and clarity, take what you’ve learned and go try out a couple of knives! You have everything you need to make the right choice for you, your goals, and your kitchen!